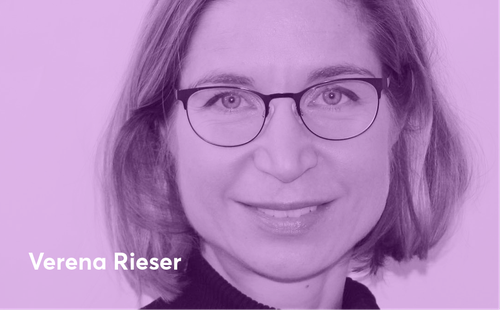 Professor of Mathematics and Computer Science and Director of the Natural Language Processing Lab, Heriot-Watt University

You might think that science is the only way into a career in artificial intelligence (AI). Dr Verena Rieser is proof that this isn’t true. Now a professor in conversational AI at Heriot Watt University, Verena’s research looks at conversational modelling, asking how we can teach machines how to have conversations

So far, so technical. But Verena actually started her academic life in literature. After a comprehensive education in science in her home country of Germany, she had “had enough of it” by the time she got to university age. She decided, instead, to do literature and linguistics– she even thought about being a journalist.

But this background is invaluable; her current work is a combination of machine learning and linguistics. She also runs a two-year masters for conversion from another field, with the first year used to teach basic computer programming and the second to specialise. Her students have a “very diverse academic background,” she says. “It’s very healthy for the discipline.”

It was a female mentor – a linguistics and logic teacher – who encouraged Verena to combine her interest in language with rigorous mathematical study. She eventually took a statistics exam and attended a computational linguistics summer school, where she met a second woman mentor; she describes herself as “very lucky” to have had such influences.

"The best thing about AI is that it’s not ‘science’ or ‘humanities’, it’s properly interdisciplinary."

AI’s reputation had something to do with her initial disinterest. Coming from school, she had no idea that AI or computational linguistics even existed – she entered the field almost by accident, falling into it. The key push factors were the female mentors she had and her university’s module system, which allowed her the freedom to take statistical classes alongside humanities.

She believes the UK’s system, which focuses far more on a singular discipline, is “too narrow”. “It’s girls especially who fall into this trap,” she says. “They tend to just go down the humanities route.”

“But the best thing about AI is that it’s both – it’s not ‘science’ or ‘humanities’, it’s properly interdisciplinary.”

Verena feels “very strongly” about getting more women into the field. She points to the multitude of other women she knows with similar career paths, who specialised first in humanities and then found technology.

The impact of this imbalance is tangible. Verena points to the recent Alexa Prize challenge organised by Amazon, where Verena’s team was the only UK university competing and reaching the finals two years in a row. In this prestigious challenge, the public chatted to bots created by university teams and teams of researchers analysed this data.

Verena's team noticed a proliferation of “sexual abuse data”. “A lot of commercial systems reacted in ways that were inappropriate responses to sexual abuse – either flirty or just not responding,” Verena says. “That’s because they were designed this way – an engineer somewhere thought ‘oh, that’s a good reply’. It’s an outcome of a culture that is not sensitive to gender issues and "bot" personalities being designed without thinking about wider societal implications. Again, a lack of interdisciplinary input.

"Young people need to be able to see all the cool things you can do with AI.”

So introducing more women into the field is key.

“It’s so important for girls to see that it’s a subject where women are successful,” Verena concludes. “It needs to be completely normal that a woman works with data or robots.”

“And we need to make girls aware that it’s a career path that’s available to them. Early exposure is needed, but not just to programming. That’s uninspiring. Young people need to be able to see all the cool things you can do with AI.”

To find out more about Verena's work visit her lab's website.