Find out why Dr Zoë Webster feels passionate about women being able to "hunt as a pack." 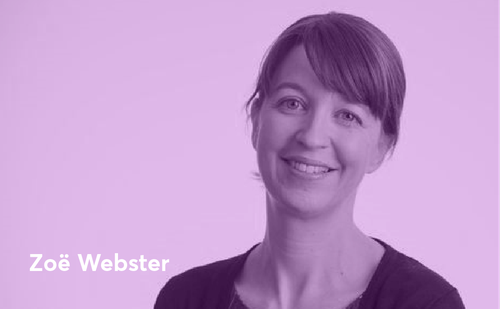 Zoë is Director of AI and Data Economy at government innovation agency, Innovate UK, joining in 2007 to develop and implement the UK’s innovation strategy for information and communication technology. Since then she has led the Enabling Technology, High-Value Manufacturing and Strategy teams.

Innovate UK runs diversity and inclusion programmes to encourage underrepresented groups to engage in business innovation. The first programme was run two years ago and focused on women. That programme has driven up the proportion of applications received from women and a second round has recently been run. Innovate UK remains heavily involved in increasing diversity in other areas too.

Zoë’s career path is all down to her early influences. She chose to study politics alongside maths and economics at A-Level – but a computing department, run by a team of two women, tempted her to drop the first subject in favour of computing. This, she says, “really sped up” her journey to a career in the field – and, though she was one of only three girls on the course, being taught by women counteracted any feeling that she couldn’t belong.

After sixth form, Zoë gained a degree in computer science at York and an MSc at Sussex that allowed her to include cognitive psychology and philosophy in her studies. She eventually completed a PhD in artificial intelligence (AI) whilst she was working full-time at QinetiQ.

“We need more women in technology because they have something to add to the field, not because they’re simply making up the numbers.”

As in her early forays into computing, solidarity with other women has been a defining factor in Zoë’s career. In her first job, she met another woman who shared the same interests as her, later working together on machine learning. In such a male-dominated field, this was no mean feat. She feels passionate about women being able to “hunt as a pack” – getting women into schools and businesses to change the image of AI and tech and working together to create a more equitable environment for women in technology.

This is important for a number of reasons – Zoë is keen to point out that diversity shouldn’t be framed as diversity for diversity’s sake. We need more women in technology because they have something to add to the field, not because they’re simply making up the numbers.

“AI informs so much of our lives, too, that’s why it is vital that a diverse set of people are involved in the development of AI systems"

This is why women also need to be involved at a strategy and policy level – the only way the industry will evolve, Zoë believes. “AI informs so much of our lives, too, that’s why it is vital that a diverse set of people are involved in the development of AI systems – and there are plenty of systems that don’t currently work as well for women’s needs. This desperately needs to change.”

As for the future, Zoë believes that education is key. Although her parents did not go to university, Zoë grew up surrounded by books about technology – her father was an electrician interested in science and computing, and her grandfather had a passion for science despite not having access to academia.

“Young people also need to be told about the applications of technology – the male-dominated, geeky image of computing just isn’t accurate”, Zoë says. “Young people need to be taught that technology can create change, and that an awful lot of it is actually fun, too.”

To find out more about Zoë's work visit Innovate UK.