The AI researcher with a varied career

The AI researcher with a varied career 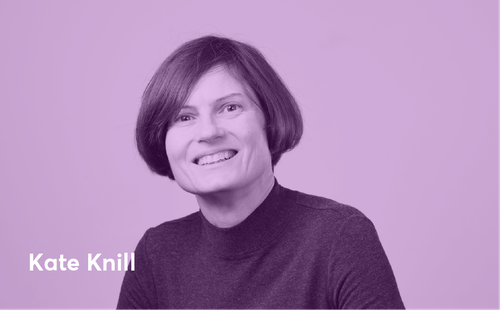 Dr Kate Knill was always good at maths. Developing an interest in electronics as a teenager, she decided to put her talent to practical use, following in her father’s footsteps and embarking on an undergraduate degree in maths and electronic engineering at Nottingham University. It was the first step in a varied career that’s brought her to her current role as Senior Research Associate in the Machine Intelligence Laboratory at Cambridge University.

It was a pre-uni gap year with a defence firm, Marconi Underwater Systems Ltd, that lead Kate to information engineering. “I hadn’t done much computing at all at this point but I got put on a project in digital signal processing,” she says. “I was just at the right place at the right time, working with a group of people I really got on with.”

Following her degree, she undertook a PhD at Imperial College, London, sponsored by Marconi. She was offered a job at Marconi but it wasn’t the right path. Not wanting to work in defence, Kate’s boyfriend at the time pointed out a postdoctoral research post at Cambridge University in speech artificial intelligence (AI). She got the job and started her career of over 25 years in spoken language processing.

“There are lots of people trying really hard to fund and attract women.”

Following Cambridge, Kate decided to travel to California to work for a startup, Nuance Communications, which was a spin-out from the SRI STAR lab and led by a female Director. Nuance had a “very supportive atmosphere,” she says, particularly when it came to family life – perhaps as there were a lot of fathers in leadership roles who took active roles in parenting.

Kate later worked in artificial intelligence (AI) for Toshiba for ten years – somewhere that the gender imbalance of tech was particularly evident. “The Japanese branch of the lab had 100 people but only one woman,” she says. “The Chinese team had 50% but not in leadership. I was pleased that my team was more even with women leaders and individual contributors.”

But despite this, Kate says she “mostly gained” from being a woman in tech. “I was the only woman who graduated in electrical engineering in my year – companies were keen to encourage women into engineering but the competition for sponsorship wasn’t as fierce as for men, so it was easier for me to fund my studies.”

“There are lots of people trying really hard to fund and attract women.”

Kate also points to influential men in her life – proving that gender equality has to be promoted by both men and women. It was her then-boyfriend who pointed her to the postdoc in speech AI at Cambridge, and growing up with an engineer father was undoubtedly an influence on her career choice. But she does acknowledge that she’s “always worked in supportive teams,” and is “very articulate”. “That’s helped me get places”.

“I did work with one guy who’d only ever worked with one woman before, and he believed that all women engineers were incompetent,” Kate says. “I had to prove him wrong.”

“People don’t realise that AI is creative and that you can have a good and impactful career in it."

The gender imbalance may be down to an “image problem”, Kate believes. “People don’t realise that AI is creative and that you can have a good and impactful career in it. It’s frustrating because you try to get people interested but it’s so hard to get them excited.”

We need a range of voices in the conversation, she says. “What is important is different to different people. A good example is Toshiba’s Open Nail project where a group of female employees proposed a new product: using image recognition to generate perfectly fitted custom-made false fingernails. Creation of machine learning/AI systems is a collaboration. It’s important for a team’s success to have a range of viewpoints and experiences”, she says.

Kate is doing her part. She’s involved in the English Language iTutoring research project, Speak & Improve, with Cambridge University; a system that helps people learning English understand their speaking ability for work, study and exams. The robot is called ‘Sandi’ – deliberately non-gendered so it will appeal to everyone.

She’s also involved in the creation of the WomenNspeech database of women working in speech. This means that or conference organisers or academic search committees can easily access a list, increasing the diversity of their speakers and candidates. She notes that it’s important to “keep women in the pipeline at the university stage”, too.

“We need to have these profiles out there,” she says. “Movements from within!”