We explored what the future of virtual reality will be in a London Technology Week event in partnership with Hot Topics, The Long + Short and FutureFest
16 Jun 2015
Village Underground 54 Holywell Lane Shoreditch London EC2A 3PQ

This packed event showcased new technologies, imagined future applications for VR in gaming, entertainment and escapism of all kinds, and debated the moral complexities of building worlds for others to live in. 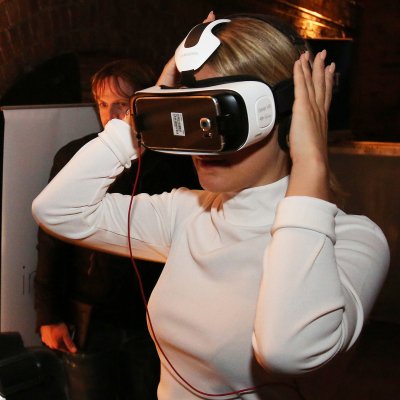 Testing out a VR headset

Ready Player One will be Stephen Spielberg's first sci-fi film for a decade. It is the story of a future in which we spend most of our time in a virtual reality game, while the world outside is ravaged by war and natural disasters. The novel on which it’s based is compulsory reading among staff at Facebook-owned virtual reality startup Oculus VR.

It is sometimes said that each generation of technology entrepreneurs has been inspired by a different sci-fi novel, and so with Ready Player One today. With the Oculus Rift headset due to go on sale to the general public next year, and augmented reality specialists Magic Leap garnering hype in Hollywood as much as in Silicon Valley, it looks like the Ready Player One fantasy could be brought to life a little sooner than the 2044 world of the book.

Recent reminders that games design and science fiction are as political as their authors brings to mind questions about the ethics of designing and living in virtual environments, and of messing with the narrative our brains construct for us everyday.

Senior Lecturer in English, New College of the Humanities, London