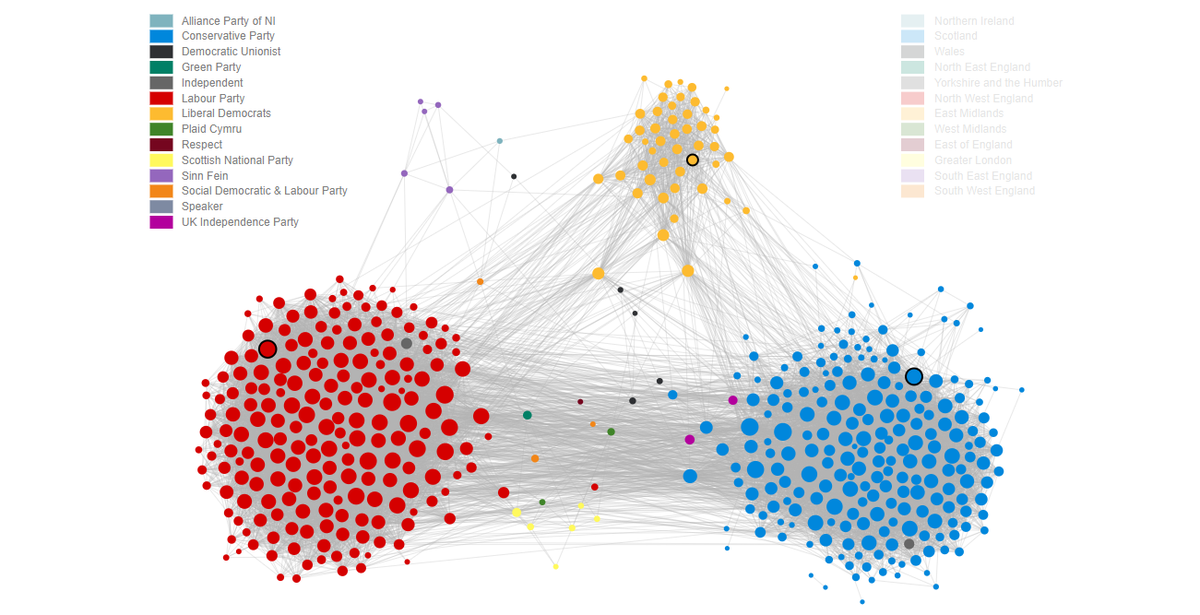 How was the network drawn?

Every MP with a Twitter account is represented by a circle (or ‘node’). Two nodes are connected by a line if both MPs follow each other on Twitter – this is referred to as a ‘mutual connection’.[1]

The position of the nodes is determined by an algorithm that pulls together nodes which are connected and pushes apart nodes which are not.[2] A larger node implies that the MP has a greater number of connections.

All the data was scraped in early February. The network will be updated after the election.

What does a reciprocal connection imply?

A reciprocal connection between two MPs implies that they are interested in seeing each other’s tweets. It does not necessarily follow that they share a common political viewpoint. MPs who have strongly opposing views might decide to follow each other, as might MPs who sit on same select committees, or represent neighbouring constituencies etc. An MP’s connections will also depend on how they engage with Twitter. For example, an MP will have few mutual connections if they use the platform predominately to share their own views, and do not use it as a way to follow the views of other MPs. Twitter is just one way in which MPs can communicate with each other.

What does the network show?

The network shows that MPs in the same party tend to follow each other on Twitter. This creates clusters of nodes that correspond to the three largest parties. The MPs in these clusters who are located toward the centre of the network tend to have more cross-party connections than those on the periphery. Cross-party connections are one way for MPs to challenge their own political views.

There are regional gaps in the Twitter network, which stem from party clusters (discussed above) combined with party strongholds in certain regions. For example, the East of England is a Conservative stronghold and (by clicking on the ‘East of England’ label) the network shows that these MPs tend to connect with other Conservative MPs. As a result, there are a large number of Labour MPs who have no mutual connections on Twitter with any MPs in the East of England. There is, in effect, a regional gap in the network. Another example is in Scotland, whose MPs are almost all from the Labour and Liberal Democrat parties. The network shows that a large number of Conservative MPs have no mutual connections with these Scottish MPs.

At an individual level, MPs for constituencies in Northern Ireland have the lowest number of connections with other MPs (an average of 6 per MP for those on Twitter with at least one mutual connection). The ‘most connected’ are those in the North East of England, with an average of 90 connections per MP. Their neighbours in Yorkshire and the Humber have the highest proportion of MPs on Twitter (at 85%), compared to a low of 66% for MPs in the East of England.

[1] The network only shows two-way connections. One-way connections are not shown (where one MP follows another, but the latter does not follow the former).

[2] The algorithm is initialised randomly and so the layout may be slightly different each time it is run.