How can governments use design to help shape the future?

Isa was an intern in the Innovation Skills team.

Throughout the 20th century the definition of design and design methodologies has evolved beyond just products and buildings. Today, its fundamental value goes further than aesthetics and is focused on user-oriented problem solving approaches that are understood by wider audiences - including some government agencies.

While science aims to explain how things are, design aims to explore how things should be by finding a solution to a problem and improving the current status quo. The problem itself can be something concrete like an unergonomic chair. But, the problem can also be as substantial as a public transport infrastructure or how a business should plan its goals. At either end of the scale, the aim of a design process is always to improve the future, which is why the future is often a dominant factor in different design activities.

“Design today is concerned primarily with commercial and marketing activities but it could operate on a more intellectual level. It could place new technological developments within imaginary but believable everyday situations that would allow us to debate the implications of different technological futures before they happen.”Anthony Dunne and Fiona Raby

In the past ten years, new design disciplines have started to make their way to the surface. For example within critical design, speculative design and design fiction are helping to set the starting point for the future. We are often familiar with future narratives in the form of film, television or books, but 'critical design' disciplines also challenge assumptions and conceptions about the role which objects and systems play in our everyday life.

So how can these new design disciplines be applied to addressing the systemic problems that we are facing today? The answer may be a simple one: as we are closer to the future every day (pun intended), we need more far-reaching future-oriented approaches.

Critical design, especially speculative design and design fiction, raises various “what if?” questions about the future. What if there ought to be a change? What if we would change? What if things were different? By creating scenarios around these “what if” questions with tangible and realistic objects, designers can fabricate an experience of that possible future. Looking forwards in time allows us to imagine problems that might still be beneath the surface or factors that are unknown but plausible or possible, demonstrated in the Futures Cone diagram below As explained by Nesta’s Jess Bland in an earlier blog, we imagined the cone as a torch beam for our report Don't Stop Thinking About Tomorrow: A modest defence of futurology. Borrowing heavily from Joseph Voros’ version of the cone originally developed by Clem Bezold, the light beam is divided into probable, plausible and preferable futures (a distinction Voros attributes to an article from 1978 by Norman Henchley). 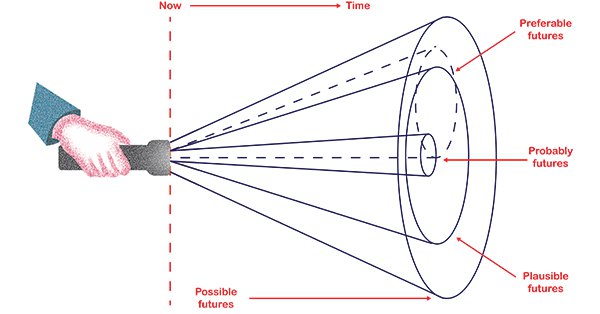 Taken from Nesta's report Don't Stop Thinking About Tomorrow: A modest defence of futurology and adapted from 'A Primer on Futures Studies, Foresight and the Use of Scenarios’ by Dr Joseph Voros, Swinburne University of Technology.

Anthony Dunne and Fiona Raby, leading pioneers of critical design, usually tackle possibilities in the realm of future technology. Many of their projects can be seen to have not only design value but to also lead the way of design fiction. One of their interesting concepts initiated in the 90s, known as ‘Design for Debate’, uses design to understand emerging technologies and to explore the social, cultural and/or ethical impacts they bring.

James King, the founder of Science Practice, a design and research company that collaborates with scientists to put research into practice, explains that this concept comes from the idea of designing an object that doesn't or wouldn't exist in the real world and initiating a discussion around whether that object would be desirable. In his opinion, the intended debate didn't necessarily happen at the time that the concept was being explored, and that mainstream Hollywood science fiction probably has had a much larger impact on the way people are informed about emerging technologies and different ideas about how the world should be. This goes to highlight the fact that the one is a mainstream media and the other a niche design field.

Design fiction, much like science fiction, often illustrates dystopian or utopian worlds with only a slight grasp on reality or hopefulness. But there are also projects closer to our everyday lives. Design studio and research lab Superflux uses speculative design to explore the uncertainties of everyday life and emerging technology in a new light. Anab Jain, co-founder and director, says that speculative design is a powerful tool that can be used as a lens to see implications for the future. A good example of their work is Uninvited Guests, which explores frictions between an elderly man and ’smart objects’ [devices] in his home. This project, commissioned by ThingTank, gives a glimpse of a not-so-distant future where smart devices - rather than being helpers - are actually controlling (elderly) people's lives.

It’s not only design studios looking into this field: in the first of their series of speculative design films, Future Cities Catapult researched and experimented with new user experiences for cyclists in cities. Introducing five prototypes based on existing or near-future technologies, the film investigates how to improve wayfinding, safety and alerts about air quality.

On a more ambitious scale, the planned Museum of the Future in Dubai, UAE, will be exhibiting and demonstrating futuristic examples of change. The Museum, which will open in 2018, gave a sneak peek during the World Government Summit in Dubai in February; it offered an experience of the world in 2035 with displays featuring artificial intelligence systems as well as theoretical devices such as mind-linking brain implant devices. The Prime Minister's Office has collaborated with the international experience design studio Tellart on the conceptualisation and design of the Museum of the Future Exhibitions through three editions since 2014. 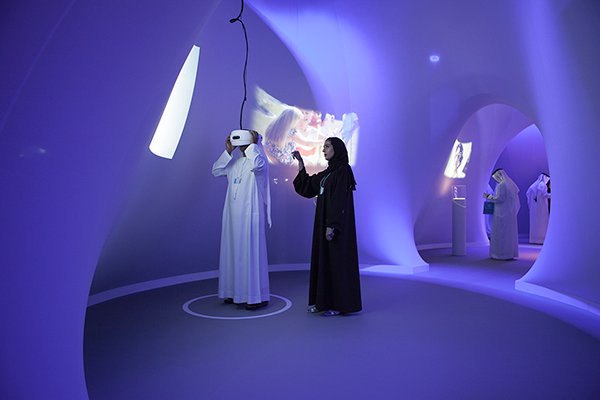 The Personal Augmentation Spa, above, was the first part of the exhibition that took visitors into the year 2035.Photo courtesy of Museum of the Future/Tellart.

Too radical for policymakers?

However both Anab and James believe that speculative design would still be useful for policymakers. It could be used as a tool with other design methods, but also within foresight practice. Recently, the UK Government Foresight department gave the method a try and commissioned research company and consultancy Strange Telemetry to do a project on ageing population; the task was to find out about elderly people’s perspectives and expectations of future.

This was the first project of its kind carried out by the government, and it was a participatory initiative that involved focus group workshops with specially designed probes and props. For Strange Telemetry, the project was an opportunity to begin developing tools that bridge speculative design, policy and strategic foresight, as well as facilitating public engagement with the complex, messy realities of socio-technical systems. Also, they were excited by the prospect of moving speculative design out of the gallery and deploying its methods to prompt – and scaffold – deliberation and debate.

“We believe that by speculating more, at all levels of society, and exploring alternative scenarios, reality will become more malleable and, although the future cannot be predicted, we can help set in place today factors that will increase the probability of more desirable futures happening.” - Dunne and Raby, 'Speculative Everything: Design, Fiction, and Social Dreaming'

Nowadays governments need new ways to approach the future, and their processes could take advantage of speculative design’s ‘shock treatment’. Not only could they find out what possible consequences some actions may have, but together with the public they could materialise all the fears and hopes that citizens have about the future. This could help to move beyond the plausible future and shape the possible future.

We should also not forget other storytelling mediums such as film and the influence they can have. But whether it is through mass media or speculative design, government's need new tools to become more future facing in their decisions and look beyond the next 15 years. To achieve this, dystopian future scenes might be just the right way to shake things up; while visions of utopian possibilities might actually inspire some public agencies to aim bigger.

Isa was an intern in the Innovation Skills team.