Giulio Quaggiotto of Nesta and Millie Begovic of UNDP share their experiences of working to embed innovation approaches into everyday practice at UNDP's country offices.

I always have the image in mind of nature re-populating concrete industrial landscapes. Roots and shoots emerging through cracks and weaknesses in the apparently solid structures and gradually weakening them until they crumble.

From the periphery towards the centre

Many organisations’ innovation journeys probably aspire to follow a similar trajectory: from small experiments at the edges to becoming “the way we do things around here” (see the chart below).“Embedding innovation in our business processes” is an aspirational mantra we have often heard when comparing notes with other development organisations. But what does this mean in practice? Where to start if this is not to remain just an empty slogan?

In our case, the prompt was an evaluation of our innovation work by MindLab that threw the gauntlet back at the organisation: could we make innovation a more intrinsic part of the UNDP culture and turn it, as it were, from a weekend sport (something that project managers were doing in their spare time and in spite of the system) into an everyday practice?

This presented us with a particularly interesting challenge: the innovation mantra (at least, the way we interpreted it), with its emphasis on system thinking, goes against the very grain of the organisational culture of a very project-orientated organisation. Based on the experience of early adopters, we spelled out four emerging abilities we saw frontrunners developing over time (see below) - but how could we embed them more broadly in a daily practice that reinforces quite different behaviours?

The road not taken

“You can't change culture. You can change things that affect people in the hope that doing so gives them a good reason to adapt their behaviour, but culture emerges from the collective behaviours of the people in your organisation over time.”
- Euan Semple

What we knew from past experience is that an “innovation toolkit” or a poster campaign would not do the trick. These are organisational shortcuts that are not suitable for a world of network leadership.

You don’t need to be a David Graeber aficionado to acknowledge that bureaucracies have a penchant for the utopian: “what should be” is spelled out in great detail for staff to follow, even if it departs quite dramatically from “what is”. Nina Vohnsen’s ethnographic work on “the absurdity of sensible decisions” in policy implementation also gave us a strong awareness of the need to empower decision-making close to where the problem is - in the field.

What could have been a desk-based exercise in identifying entry points for innovation in the UNDP project cycle turned therefore into a collaborative exercise with project managers and partners in four different locations (Georgia, FYR Macedonia, Moldova and Kyrgyzstan). When we worked with the project teams (at different stages in their project implementation), our work was informed by some basic principles:

What became apparent during our work with the project teams was that what we were not embarking on a re-engineering exercise, but rather we were helping staff “find the cracks” at each steps of the project cycle, within existing systems. In many instances, this still leaves plenty of room for “tinkering”. For example, assuming that research will lead to a specific policy action is just that - an assumption. But if taken as the truth, a team can invest a lot of effort in analysis without really understanding the conditions under which the findings would (or would not) be taken up by for example men vs. women or in rural vs. urban areas.

On a different note, designing projects for people as rational decision-makers may lead to many dead ends, but framing an issue in an irrational way can lead to projects with non-obvious solutions that work - take a look at the ‘want a bride, get a toilet’ example.

Exploring the cracks does not require any new process but merely an adjusting and reframing of our work within existing parameters. It entails distinguishing between negative and positive freedom mindsets: colleagues often look to policies for explicit approval to do something, whereas our approach was encourage them to ask first “show me where it says you can't do it this way?”.

Perhaps even more crucially, finding the cracks requires reconnecting project managers with the spirit of existing procedures, not the letter. The linear narrative of an existing project proposal, which bureaucratic inertia often reduces to an accounting exercise constrained by a logframe, can then go back to being what is was meant to be: a list of assumptions in the ‘if this, then that’ format. These can then be tested and enable the team to pivot as they go along. As Tiago Piexoto put it: a theory of change is, at its best, an hypothesis of change.

So while field colleagues were indeed still pointing to many binding constraints imposed by existing procedures, we ended up exploring entry points to “hack” the project cycle that would require no change in corporate policies. The hacks can then be socialised through team discussions and only once the purpose is clear will they be eventually supported by tools. 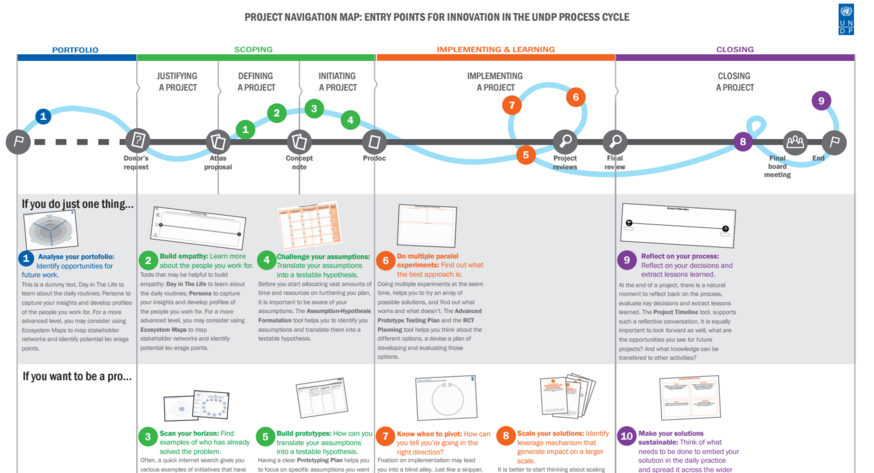 A tool to initiate and facilitate conversations around entry points for innovation in a project cycle.

“Feedback loops are an equivalent of diagnosing and treating a disease; a conventional evaluation is more like an autopsy and thus of limited value to the patient.” - Marc Gunther

The journey continues. We will roll out our “hack the project cycle” initiative in the coming weeks and see whether it does nudge innovation at UNDP to move from a weekend sport to daily practice. Watch this space for future updates.