Here are the results in full from the general election:

This was a fascinating and complex election. But in many respects it was quite simple, and was a surprise mainly because of the recent polls, not because of longer term trends.

Although the anti-political mood fuelled the huge success for UKIP and the SNP this ended up for many as a choice between the two main parties, and two potential Prime Ministers, and was decided because the public split 5:4 in favour of David Cameron over Ed Miliband: not a landslide but still wholly decisive. A few factors are sufficient to explain this.

Although he has many virtues and fought a spirited campaign, it has been clear for 2-3 years that Ed Miliband had not won the confidence of the public. Once views of leaders are formed, they rarely change.

The Conservative success in blaming the last Labour government for the economic crisis and the debt was bad economic analysis and poor history but a political triumph.

Labour’s policies against predatory business were popular but were not balanced by a credible policy to grow good, creative business and jobs, further reinforcing their deficit on economic competence.

Across the world the public is not keen on austerity but fear parties that don’t signal seriousness about being frugal. Centre left parties have to work particularly hard to show that they care about value for money and savings. Labour said very little about this.

Labour won the digital battle, with an impressive machinery and activist base. But elections are still more analog than digital, and the Tories overwhelmingly won the top down media battle, thanks to their allies in the print media.

Perhaps the most telling reason for the result can be read in the Nesta analysis of speeches and manifestos. This looked at how future oriented these were. The chart below summarises the analysis of the party manifestos, and shows that Labour’s programme was largely defensive. It’s often said that in politics whoever owns the future owns the present, for all sorts of subliminal as well as direct reasons. This chart was one factor of many that made me place a bet on the Conservatives becoming the largest party and forming a minority government (I won half the bet and lost the second – I thought they would fall a few seats short of a majority). 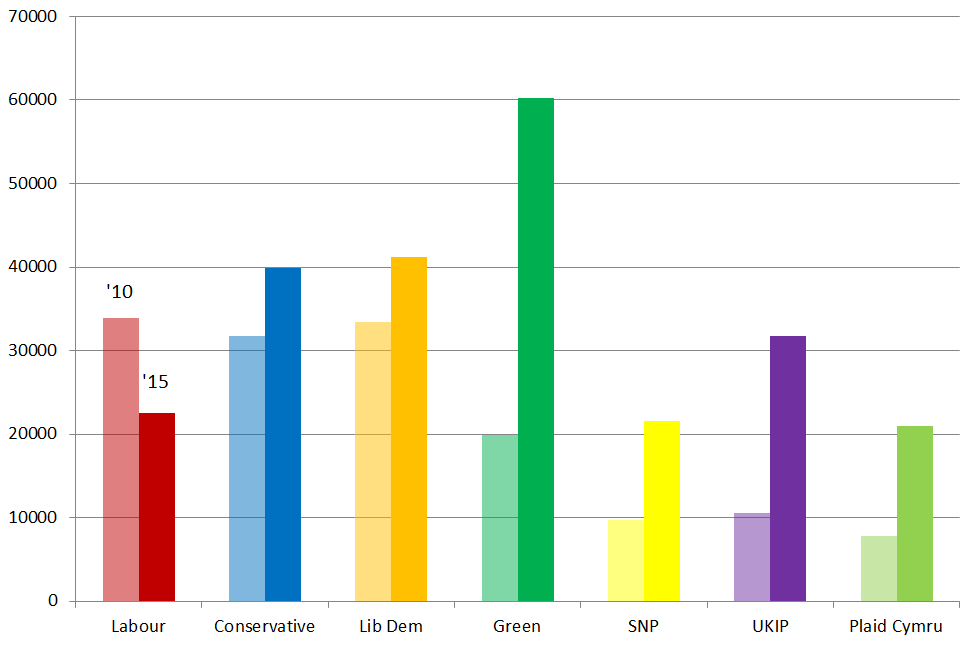 David Cameron has obviously achieved a very significant personal as well as party victory. He will face very challenging times ahead coping with his backbench ‘nutters’, with a disunited kingdom and a still-unresolved fiscal crisis. But hopefully his government will – in line with the chart above – emphasise the forward-looking and progressive strands of modern conservatism rather than the meaner, backward looking and atavistic ones.