How will creativity and invention play a critical role in helping us to shape a better future?
Wednesday, 29 January 2020
In Futurescoping
2 comments
4 min read

In the future, invention will be driven by loss. At FutureFest in March one of the themes we’re exploring will be the future of creativity and invention. As a provocation I wanted to share the three things that I believe will shape how we create and invent in the future.

1. Creation will exist alongside loss in an era of ecological disaster

We tend to think of creation and invention as a productive, generative activity: making new objects, designing new materials. Creativity is an idea that is associated with abundance. Invention is associated with objects and outputs. In the West, we have lived through nearly a century of prosperity, where land and natural resources have been explored and exploited for our comfort, convenience and entertainment.

But while we were inventing at a faster pace than at any other time in human history, we were also quietly destroying the existing ecosystem we enjoyed. A recent report estimates 60 per cent of the world’s animal population has been wiped out in the last 50 years.

We are, belatedly, catching up with this mess. Or perhaps, more accurately, it is catching up with us. Even if we take drastic action, we will still inevitably see environmental loss on an unprecedented scale.

While we were inventing at a faster pace than at any other time in human history, we were also quietly destroying the existing ecosystem we enjoyed.

So creativity in the future will have a different flavour to it. Rather than the abundance of the past, it will be grounded in scarcity and loss. Our creative endeavours will be focused on preservation rather than progress, and on putting greater value in what we already have as opposed to what could be.

Frivolity will come under scrutiny and we will seek greater connection with the things that surround us and the spaces between. It will involve what Johann Wolfgang von Goethe referred to in 1790 as ‘dwelling in the phenomena’ and Donna Harraway today calls ‘staying with the trouble’. This is a recognition that we need a relationship with loss to be able to understand this new context and create within it.

I see hints of this in organisations like A New Field, a new company that’s experimenting with how anyone can make everyday objects from natural materials, like making a toothbrush from crushed mussel shells. It’s also evident in designers and technologists in the UK Government and their #onegreengov work, or in the Masters courses in Design for Social Innovation and Sustainable Futures at the London College of Communication. We are already training a new generation of artists and designers in how to explore this future.

Anyone can make everyday objects from natural materials, like making a toothbrush from crushed mussel shells

Alongside this sense of environmental loss comes a renewed appreciation of it. We will return to using the word ‘ecosystems’ in its truest form: the ecological systems that human beings are part of. In his last two books, Timothy Morton makes the case for deeper coexistence of people within the environment, alongside other animals, insects and bacteria, relegating human exceptionalism to a more level footing with the natural world.

In the future we’ll see more and more unlikely collaborations across species – natural and artificial – opening the door to a better appreciation of the creativity and capacity for invention amongst human and non-human beings.

In October, Nesta invited artist Heather Barnett to deliver a session working with slime mould, a single cell organism which, ‘whilst it has no brain or central nervous system, demonstrates primitive intelligence and an impressive capacity for collective action’. Heather works with slime mould in order to explore how groups of people engage with non-human forms of collective intelligence.

In the future we’ll see more and more unlikely collaborations across species – natural and artificial – opening the door to a better appreciation of the creativity and capacity for invention amongst human and non-human beings.

In a similar vein, Holly Herndon is a musician who has pioneered collaboration between humans and AI. She’s created a musical AI that’s been trained using choral singing called ‘Spawn’. She refers to Spawn as her ‘inhuman child’ and names it on tracks on her album PROTO. One of the most intriguing tracks on the album, Extreme Love, offers a vision of life beyond humans, where bacteria ‘thriving in extreme conditions, proved more fit, better at taking the next leap’, and where human beings are just one part of the complex and often hidden ecology of the universe. Bacteria will be painting their own self portraits next.

William Meyer has documented growth in the field of biodesign, where artists, designers and even builders move beyond biomimicry and start to incorporate living organisms and ecosystems into their work. Koen Vanmechelen uses chickens as a mirror for the human race, highlighting the benefits of cosmopolitan diversity through cross-breeding and producing a ‘Planetary Community Chicken’, which farmers can introduce to increase diversity in the coop. He credits the chickens at the end of his short film. 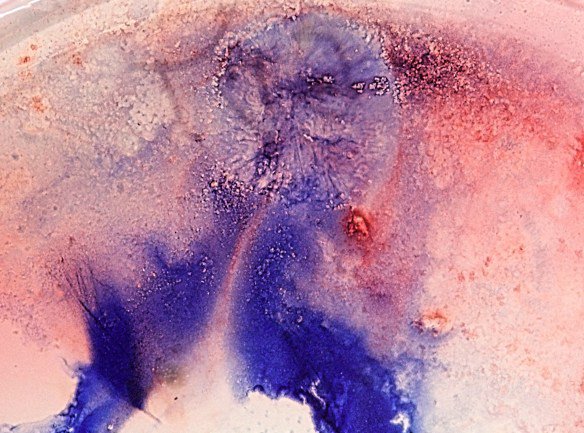 Microbiomal paintings were produced by the bacteria from the artist's gut.

As we redefine our relationship with creativity and invention, we have to play with the new and the unknown. Working with new materials opens new possibilities. Exploring the full potential of a material means being experimental, open to unusual outcomes or sensations.

Design as a profession often means coming up with methods that are replicable and repeatable. So we have a wealth of innovation methods and frameworks to help us package up creativity and invention. But anyone who’s been through a less-than-inspiring design sprint will know, you can’t always simply trust the process.

As we redefine our relationship with creativity and invention, we have to play with the new and the unknown.

That’s not to say there’s not a place for standardised methods. Tried and tested methods can scale, speed up and democratise the process of invention. It’s more about recognising that, as we enter a new era where our role in creativity is shifting from from all-powerful beings to collaborative participants, we will have less control over the creative process. As a result we will have to become more scrappy and experimental.

Creativity and invention have always had a critical role in leading us into the future. Art and technology work closely together to first imagine and then make possible the worlds we’ll exist in tomorrow.

It’s these three ideas that I believe will shape how we approach creativity and invention over the coming decade. For what it’s worth, I don’t think they stop with art, design and innovation either. I expect we’ll see this sentiment seeping into our politics as we try to work through our democracy crisis.

You’ll get a taste of this and lots of Nesta’s other work at this year’s FutureFest. Join us on 20 March at London’s Tobacco Dock to explore the future of creativity and invention.

Posted by Dr Marilyn Fryer
5 Feb 2020
This article makes an interesting observation which really rings true, yet it is perhaps worth pointing out there are many past instances where 'necessity has been the mother of invention' to quote a well-known saying. Consider, for example, the creativity of prisoners of war in the Second World War who made daring plans for escape.
Posted by Ed Bernacki
5 Feb 2020
Perhaps we need to add the element of time to this discussion. I started in this field in the 1980s. The notion that creativity is about positive issues versus negative depends on what you worked on. I worked on finding solutions to bad issues (lack of immunization, pollution and dying off of wildlife) in the 1990s. I like this notion: We’ll find ourselves doing more scrappy, experimental work. Again, I wonder if this is an age issue. When I started it was scrappy. We read lots of different books to gain the insights and tools (from the 1950s work by Alex Osborn to Edward de Bono to work on by Kirton cognitive diversity). When design was packaged into a five-step process "design thinking" it seemed that this could solve every problem. Yet, a lot of us recognized the flaws which related to the lack of deep understanding of the core principles and tools. As Dr Kirton said year ago, “Our problems have become so complex, and the penalty for not solving them so high, that we need to study the problem-solvers and the problems we need to solve.” The study of problem solvers and cognitive style is something we need to explore far more.

Collective intelligence and the smart city 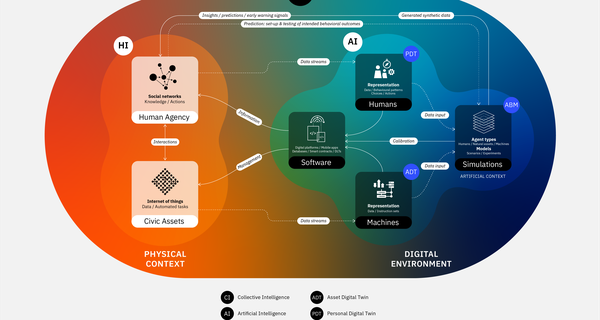 A project to develop 3 speculative use cases for using human and machine intelligence to help communities address the climate crisis.