Ahead of FutureFest 2018, speaker Douglas Rushkoff argues that anything that connects us to one another is good and pro-human.
27 April 2018
In Futurescoping
4 min read 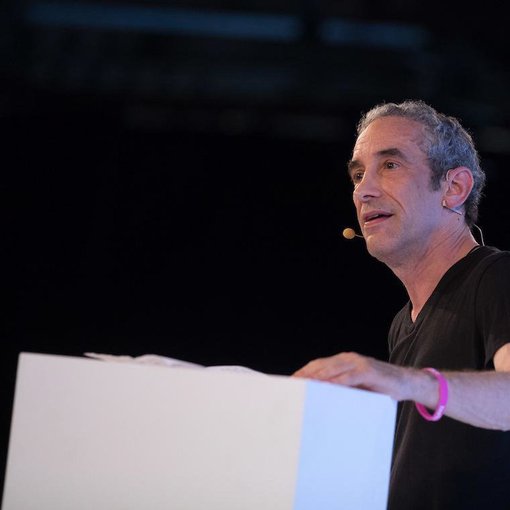 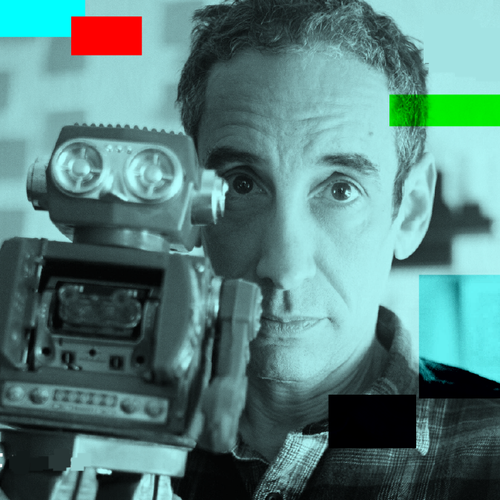 Douglas Rushkoff is a writer, documentarian, and lecturer whose work focuses on human autonomy in the digital age. He is the author of fifteen bestselling books on media, technology and society, including 'Program or Be Programmed', 'Present Shock', and 'Throwing Rocks at the Google Bus'.

Named one of the world’s ten most influential intellectuals by MIT, he is responsible for originating such concepts as 'viral media', 'social currency', and 'digital natives'.

Today, Dr. Rushkoff serves as Professor of Media Theory and Digital Economics at CUNY/Queens, where he recently founded the Laboratory for Digital Humanism and hosts its TeamHuman podcast.

What is Team Human all about?

Right now, Team Human is a podcast, radio show and book project. It argues for a role for human beings in the future.

A lot of people in Silicon Valley see human beings as the problem and technology as the solution... I think humans are the solution

Silicon Valley seems to think that we’re somehow going to compensate for humanity's faults with digital technologies. I don’t think humans are obsolete. I don’t think humans are the problem, I think humans are the solution. I believe that there are essential values and qualities of people that are not making the translation into the digital realm. Maybe they can’t quite be quantified, and maybe that’s the part of humanity that we should be exploring and celebrating now. Instead, we seem to be forgetting about them and that concerns me.

So, Team Human is an argument that being human is a team sport and anything that connects us to one another is good and pro-human. Anything that isolates us from each other is anti-human. Certainly we can evaluate our digital technologies that way. Does Facebook bring me together with others or does it separate me from them? Or is it some of both? And how do I enhance the connective over the alienating?

While your most recent book explored some of the routes of social injustice, Team Human is very optimistic and solution-focused. But looking at the way most businesses are built today, can they really start treating us less like consumers and more like humans?

The easiest way for a business to transform the way it engages with customers is to change its orientation from 'how can I extract value from this person' to 'how can I help this person create value?'

The idea is, how do you make your customer wealthy enough to spend more money with you?

Do you want rich customers or poor customers? Do you want customers to think that by engaging with the company they'll start doing better? Do you see your company as something long-term? What’s going to happen in a year, not just next week?

You’ve got to start thinking about how you sustain the wealth long-term. How do you make your customers suppliers and everyone else in your eco-system rich? If your market is wealthier, that gives you more time before you have to pivot into a different market-place. These scorched earth tactics, they don’t help the company endure. YouTube does it a bit better where they’re trying to share some revenue with the people making videos.

It requires thinking about long term value rather than short term profits. But it’s almost incompatible with a lot of business models.

That’s partly because of how shareholders understand companies. For most companies, once you go public it’s the end game. You just extract profit in the short term. But the alternative is to run a company like a family business; your kids go to school with your customers, and the thing you’ll bequeath your grandchildren is not the money you’ve extracted from the company, but a thriving business. Long-term, family businesses make more money over time; so do cooperatives.

You have spoken about the fact that the best organisations are platforms that facilitate exchanges rather than those that plug products or services. As consumers, we are already becoming more intuitive and savvy. Do you envision a natural evolution towards more collaborative and humanistic business models, which truly listen to people, or do you think it will be a struggle for businesses to evolve in this way?

I do see that happening. I think a couple of giant companies are going to end up gobbling up the lion's share of traditional retail and sales. The alternative will not be their competitors who function in the same way they do, it’ll be the radicals such as local businesses that can’t distribute on that scale.

You’ll have a choice – am I going to buy a case of 36 muffins with preservatives from this corporate giant, or muffins made fresh every morning from the local baker?

Local business only have a higher cost of goods than global corporations if they insist on using the same global supply chain to source their materials. If they source their materials locally, and use local currencies, favour banks, or something other than central currency to enact their exchanges, then they are no longer so easily undercut by the Wal-Marts of the world. The local baker can ultimately get me the muffins at a lower final cost - especially if I’m creating value for him, maybe by tutoring his kid or doing something for the town that matters to him.

Once local politicians gain an understanding of that, they’ll change tax law. Instead of favouring the 200,000 employees of one corporation that’s not even in their state, they’ll think, what if I create tax laws that promote the health of people who are trying to get by on a local exchange network? We can see the economy tilting towards people exchanging value with each other rather than just being drained by these giant corporations.

Find out more about the Team Human project here.

Hear more from Douglas and other radical speakers including Ruby Wax, Nick Clegg, Imogen Heap and Paul Mason at FutureFest 2018 - get your tickets here.