As Nesta announces the return of FutureFest in Spring 2020 and a new series of FutureFest Lates, Celia Hannon takes a look at why times of crisis and stasis call for a dose of futures thinking.

If you can still bring yourself to keep up with the news, you’d be forgiven for thinking the country is trapped in the political equivalent of the film Groundhog Day. As we wake each morning only to see the same loops play on repeat at Westminster, we start to understand exactly how Bill Murray’s character feels. But what starts out as a collective experience of powerlessness about Brexit gridlock, can easily play into a building sense of inertia about the future in general.

It’s at such moments that nostalgia for simpler times seems to offer a tempting escape, both from political paralysis and a wider sense of instability. It’s no surprise that nostalgia is in the ascendance, not just in the UK but across all of Europe. According to a recent survey by a German Foundation, two thirds of Europeans (67 percent) believe that the world used to be a better place. The UK think tank Demos has also just analysed how easily an upsurge in nostalgic narratives can be harnessed by politicians capable of tapping in collective fears about the future or the costs of ‘progress’.

Nostalgia does have its comforts, but passivity and inertia are far from harmless. In a new book creating waves on both sides of the Atlantic at the moment, The Uninhabitable Earth: A Story of The Future, David Wallace Wells points out that the impact of climate change denial is arguably outweighed by the impact of inertia or mass complacency about the environment. So while disengagement and passivity might be a natural human response to the threat of mass-extinction, it’s also the most dangerous one.

Perhaps it’s no coincidence that dystopian sci-fi has seen such a resurgence in popularity over the past few years - escaping into an alternate, fictional universe sounds like just the ticket when reality starts to feel too overwhelming.

Perhaps it’s no coincidence that dystopian sci-fi has seen such a resurgence in popularity over the past few years - escaping into an alternate, fictional universe sounds like just the ticket when reality starts to feel too overwhelming.

And if that universe is even more apocalyptic than reality, well, there’s a perverse comfort in the idea that things could be always be worse (The Handmaid’s Tale and Black Mirror are prime exemplars of this effect in action). But can sci-fi actually help us have deeper public conversations about the direction of social, environmental and technological change?

In our very first FutureFest Late this May, we’ll be exploring the way that sci-fi often serves as a conduit for contemporary anxieties about the future. Opening up the conversation will be the host of BBC Radio 4’s The Life Scientific, Jim Al-Khalili. An expert on areas of cutting-edge science (such as dark matter and quantum biology) that will shape our understanding of the world around us in coming decades, Jim has also just written his own sci-fi novel, Sunfall. As a scientist switching between ‘hard’ science and fiction, he’s in good company. There are a host of sci-fi luminaries (from Arthur C Clarke to Isaac Asimov) who were originally scientists by training, but who used novels as a means of venturing further into the unknown or investigating troubling themes. 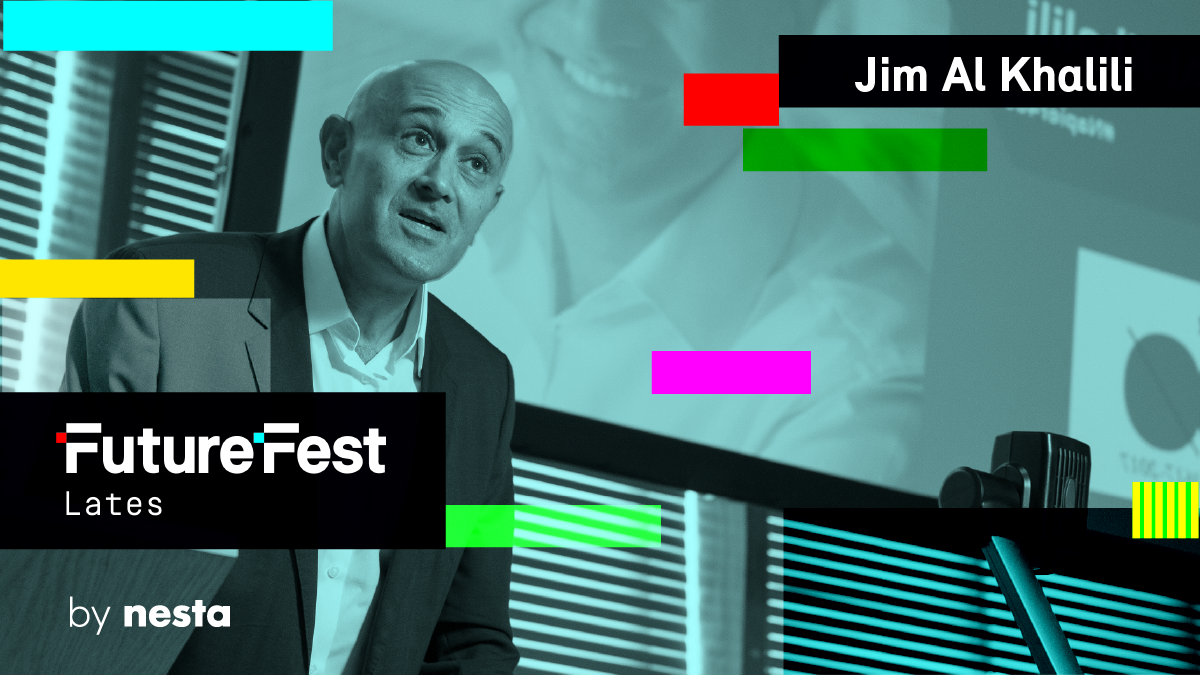 It could be easy to dismiss sci-fi as a form of escapism which is as unproductive as nostalgia, but, at a time when anti-science sentiment has edged into the political mainstream, fiction and films are playing an increasingly critical role in shaping public attitudes about the future. Take charged ethical questions around the place of AI in society, the public is generally far more inclined to engage with theses issues when they find expression in a compelling story, as opposed to abstract policy and regulatory debates. Fiction, storytelling and drama can, in fact, be a powerful means of countering apathy.

The inaugural FutureFest was held in 2013, in the wake of a financial crisis and just as austerity was taking hold of the country. As our CEO Geoff Mulgan put it in his introduction to the festival, it felt as if ‘horizons have shrunk, leaving our future underexposed, dim and obscure’. For different reasons, six years later the same can be said of the nation’s mood and our capacity to look beyond the next few months - or even days.

The theme of last year’s FutureFest was ‘occupying alternative futures’. In the midst of a fierce July heatwave (which acted as a sharp reminder of the costs of collective inaction on the climate), the audience heard the likes of Douglas Rushkoff, Kate Raworth, Imogen Heap and Jeremy Heimans make the case for their vision of alternative systems. We’ve chosen to bring FutureFest back - with the addition of a year-round series of Lates - because we think that at times of looming crisis and instability, this kind of expansive thinking about different possibilities is more vital than ever. We hope you will join us to be part of at least one conversation that looks forwards, not backwards.